in Houston! Every year this conference is a chance to meet new and old friends and to make connections with future faculty. We are excited to announce that Richard Notkin will be teaching at La Meridiana in 2014. He has studied in depth the foremost Italian Relief makers of the past, the Della Robbia family and will build upon these influences to draw inspiration for comment and contents of the works students will make. See below the piece he has at the Museum of fine arts in Houston. Jason Walker, sculptor with affinity to Richard Notkin will be co teaching in this insightful workshop. 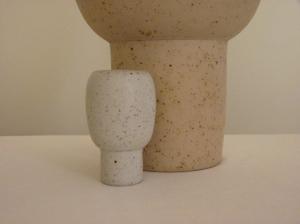 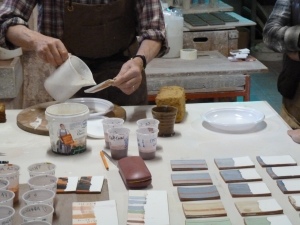 Sourcerer, magician, stregone, alchimist – who is that, weighing and mixing unflaggingly oxides and minerals, pouring from bowl to bowl, to create the ultimate suspension? John Colbeck is probably the most important potter and instructor to be involved over the whole lifespan of La Meridiana, and it is 32 years now. He has taught legions of potters to throw, but beyond the technique, to understand and love ceramics. His teaching has been highly influential, wherever he has taught. Back at La Meridiana after several years, his throwing master workshop in August 2012 has continued a tradition of remarkable workshops, interrupted due to his own intense projects . The benefits of his vast knowledge however will be available to all future students: presently he is organizing the La Meridiana glaze library!
His tests on high and low fire clays will lead to an ultimate choice of luscious glazes – understandable and repeatable, a huge support when planning and making whatever ceramic object!
John Colbeck’ s next workshop at La Meridiana: http://www.lameridiana.fi.it/pottery_workshops_john_colbeck_34_13.htm

Posted by meridianaceramics | Filed under PAPERS